Over the past year I’ve gotten to know some excellent new authors. One whose book I truly enjoyed was Catherine Cavendish. I’m thrilled that she is a guest here as she sheds some insight into her newest novella, ‘Dark Avenging Angel’. Please consider trying one of her books if you haven’t already. Also: Amazon reviews are more helpful than people realize. Please-please-please review the works you’ve read. It truly does make a difference to the authors. Thank you. –john–

Revenge of the Churel

My latest novella – Dark Avenging Angel – is, as its title suggests, concerned with revenge. In this case, revenge of the most demonic kind. We’ve all heard the old adage, “Be careful what you wish for…” Jane learns the truth of this in graphic ways.

Avenging angels and demons abound in the traditions and folklore of people all over the world. One such character is a churel – a female ghost of South Asian folkore, well known in the Indian sub-continent.

There are variations on her origins. She may have died in childbirth, during menstruation, or as a result of poor care while pregnant. It is said that if a woman (especially one from the lower social classes) dies in pregnancy during the five-day Hindu Festival of Light (Diwali), she is even more likely to turn into a churel. Whichever is the cause, the churel is an angry and vengeful spirit who returns from the dead to suck the blood (and other bodily fluids) of her male relatives.

Churels are most often found in and around graveyards, abandoned battlefields, crossroads, thresholds of houses, toilets and a host of squalid locations.

They can take the form of a hideous woman with sagging breasts, backwards facing feet (toes at the back, heel at the front), long sharp teeth, a black tongue and unkempt hair. The churel frequently roams naked, and has a pot belly and claw-like hands. Some churels have unusually thick lips, or even no mouth at all. Some have pig-like features with long fangs or tusks.

A churel can also be a shapeshifter – able to transform into a beautiful young woman, in order to lure any young male relation she wants. When she has got him where she wants him, she then drains him of his virility, turning him into a prematurely aged, grey-haired old man. Once she has finished with him, she moves onto the next male relative until her vengeance is satisfied. This thirst for revenge may be so great that it involves more than her own family. She may go in search of other young men on highways, or at crossroads, where she lures them in her enchantress guise. In some stories, she will imprison her victim in a graveyard and use him – little by little – sexually and by draining his blood until he withers and dies. There is even a story of a young man who was seduced by a churel, ate the food she gave him and returned to his village the next day as an old man.

In some traditions, the churel may transform and become a servant of the goddess Kali, joining with her to feast on human flesh and blood. 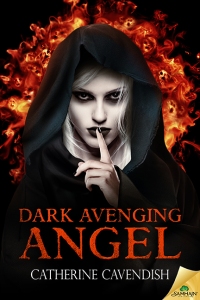 So how do you prevent yourself becoming a victim of a churel? The solution is quite simple, men should treat their wives well. Look after them in pregnancy and childbirth. If that fails though – and the wife falls sick and dies, the best methods are to bury rather than cremate her body and perform certain rituals. The body may be bound. Nails and other bindings may be used to imprison the would-be churel in her grave, and the woman should be remembered – with love and honour – in songs and prayers, so that her spirit doesn’t feel forgotten or neglected.

Now, to give you a taste of Dark Avenging Angel, here’s the blurb:

Don’t hurt Jane. You may live to regret it.

Bullied by her abusive father, Jane always felt different. Then the lonely child found a friend in a mysterious dark lady who offers her protection—a lady she calls her “angel”. But that protection carries a terrible price, one to be paid with the souls of those Jane chooses to suffer a hideous and eternal fate.

When Jane refuses to name another victim, the angel reveals her most terrifying side. Payment must be made in full—one way or the other.

And here’s a brief extract:

Something had woken me from a deep sleep troubled by my recurring nightmare in which I was in a wood, being chased by some unimaginable horror. I never saw its face, assuming it even had one. But I knew if I didn’t find sanctuary, it would kill me. I had just made it into the strange little house that always appeared in the clearing, when my eyes opened and I gasped at the white, smiling face looking down at me.

Oh, she looked the same. Same black cloak, but this time it shimmered and I wanted to touch it. I was sure it would feel soft as velvet under my fingers.

She put her finger to her lips and stroked my hair. Her touch was like a gentle breeze in summertime. My eyes wanted to close, but I forced them to stay open.

I knew I mustn’t speak out loud, but I could still whisper. “I wish I knew your name. Who are you? Please will you tell me?”

She continued to smile. Her lips moved, but the answering voice I heard was again in my head.

Do not be afraid, child. It is not yet time, but soon you will have the power to avenge yourself on those who have done you harm. Look for me in the shadows and I will be there, taking account.

I understood nothing of what she said. But, from somewhere, a calm I had never felt before emerged and wrapped itself around me.

I blinked in the darkness as she faded from sight.

Then I closed my eyes and slept. I never had that nightmare again after that night. But what if I’d known what was ahead for me?

Some things are better off left in the dark.

Following a varied career in sales, advertising and career guidance, Cat is now the full time author of a number of paranormal, ghostly and Gothic horror novels, novellas and short stories. She was the 2013 joint winner of the Samhain Gothic Horror Anthology Competition, with Linden Manor, which features in the anthology What Waits in the Shadows.  Her novels, The Pendle Curse and Saving Grace Devine are also published by Samhain. Her latest novella – Dark Avenging Angel – will be followed by her next novel – The Devil’s Serenade – in April 2016

You can connect with Cat here: